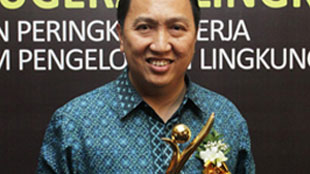 Adaro CEO Garibaldi Thohir spoke to Bloomberg recently to outline the environment facing coal majors in Southeast Asia. Here is the text of the interview with reporters Fitri Wulandari and Harry Suhartono on May 21:

PT Adaro Energy, Indonesia’s second- biggest producer of power-station coal, said miners will have to adjust to prices of about $100 a metric ton, which is half a peak reached in 2008.

“The new normal, I think, would be $95 to $100 a ton, based on the marginal cost of production in the region,” Adaro Energy President Director Garibaldi Thohir said in an interview.

A slump in coal prices will help ease oversupply as it would prompt some small and high-cost miners to reduce output or stop production, Thohir said in his office in Jakarta on May 17. Adaro is expected to report lower net income this year than in 2012, Thohir said, without giving a specific forecast.

The price of coal has fallen by more than half since a peak in mid-2008 amid slowing Chinese imports and rising output from producers including Indonesia and Colombia. The decline is forcing companies including Adaro to trim costs to safeguard margins. Thohir said the price may have bottomed.

Adaro shares fell as much as 3.6 percent to 1,080 rupiah as of 1:59 p.m. in Jakarta trading. Before today, they had lost 30 percent in Jakarta this year, compared with a 21 percent jump in the Jakarta Composite Index.

Margin Pressure
Adaro targets earnings before interest, tax, depreciation and amortization of $850 million to $1 billion in 2013, down from $1.1 billion in 2012. That compares with the $966.5 million median of 22 analysts’ estimates compiled by Bloomberg.

Thohir said Adaro is poised to achieve the full-year target after reporting Ebitda of $190 million for the three months through March. Falling coal prices have depressed Adaro’s Ebitda margin, which fell to 23.2 percent in the last quarter of 2012, the lowest since the company went public in July 2008. The margin recovered to 25.6 percent in the first quarter.

The company declined to provide guidance for the full-year Ebitda margin. Adaro reported a 66 percent drop in first-quarter net income to $41.6 million on April 30.

The decline in earnings “shows the impact of margin compression as Adaro’s cost cuts could not fully cover the drop in coal price,” Erindra Krisnawan and Erisca Wiraatmadja, analysts at PT CIMB Securities Indonesia, wrote in a report after earnings. CIMB has an underperform rating on the stock.

The stock traded at 10.7 times 12-month projected earnings as of the close yesterday, according to data compiled by Bloomberg. That’s lower than the price-to-earnings ratio of 15.8 for the Jakarta Composite Index, and higher than the 9.3 ratio for the MSCI Emerging Markets Metal and Mining Index.

Efficiency Gains
Adaro targets cash costs of $35 to $38 a ton to produce coal this year by increasing efficiency. This will include a plan to cut reliance on dump trucks by operating a conveyor to remove soil waste from the Tutupan mining site, according to the company’s annual report. Thohir said the conveyor will start running within two months.

Adaro’s cash cost was $37.1 a ton in the first quarter and $38.9 a ton in 2012, excluding royalties, according to the company. “Nobody can control the price,” Thohir said.
“What’s within our control is how we can manage costs.”

Adaro plans to produce 50 million to 53 million tons of thermal coal this year, compared with 47.2 million tons in 2012. The company has already sold all its fuel for this year, Thohir said.

Creating Demand
“We still see strong demand for coal,” Thohir said, noting record demand from China and India last year. ”While we are experiencing volatility in the industry, we believe the long-term fundamentals for coal remain intact supported by robust demand in the Asia-Pacific region for moderate and low- rank coal.

Electric Power Development Co., Itochu Corp. and Adaro Energy won the right in June 2011 to build a 2,000-megawatt coal-fired power plant in Central Java for an estimated $4 billion. The project is expected to be completed in 2017.

Indonesia was Adaro’s biggest buyer of coal in 2012, accounting for 23 percent of its sales at 48.9 million tons, based on data provided by the company. India and Spain ranked second and third, respectively.

“Miners who are inefficient will collapse,” Thohir said. “Only producers with the lowest costs will survive. I believe Adaro will be the champion.”